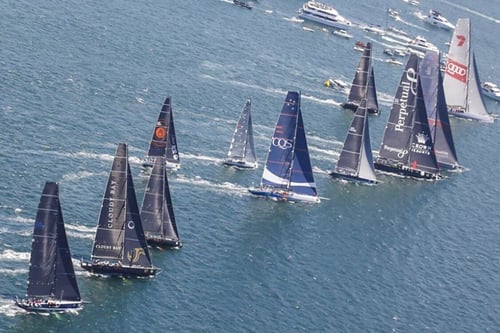 A number of elements contribute to the race experience: the boat you sail on, the changeable (or not) weather patterns and particularly the winds, wind-generated waves and swell, the ocean currents, and tides and topography in the Storm Bay and the Derwent Estuary. Details about currents in Storm Bay and the Derwent can be found here, here we concentrate on the ocean between Sydney and Tasman Island. 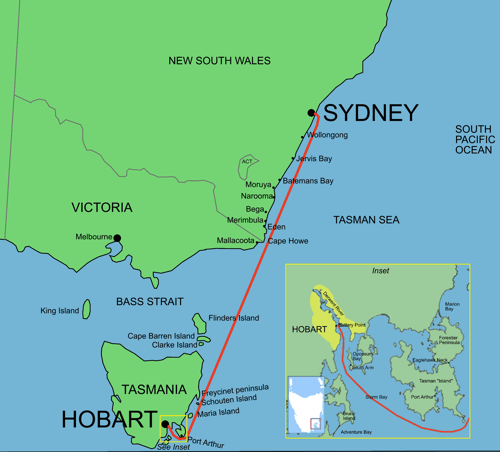 We all know the weather can change very quickly. However modern weather forecasting can provide accurate forecasts of large scale features out to 7 days with a high probability of occurrence. Depending on the forecast wind strengths and directions boats have to decide how far from, or how close to, the coast they sail. Some boats are more susceptible to wave drag than others, so these also have to consider their progress relative to wave height and direction; this can be critical when crossing Bass Strait, notorious for acting as a 'funnel' for westerly winds and waves. The third element is the ocean current, and particularly the East Australian Current (EAC). This is the large scale ocean boundary current running down the east coast of Australia. It starts north of Brisbane and reaches, on occasions, as far south as the Tasman Peninsula. In fact the EAC is, on average, reaching further south each year due to climate change.

The EAC though, is not a steady current. It fluctuates during the year, being driven by winds over the South Pacific, and its speed and broad extent can vary (it can be 100km wide) as the current progresses southwards along the east coast. The current is strongest in the summer. It has its largest flow rates close to the coast, up to 3.5 knots around 30S. At the New South Wales border, because of the change in coastal direction, it splits into two parts, one continuing south and the other moving offshore towards New Zealand, known as the Tasman Front. As the flow moves offshore it triggers instabilities in the current. This triggers the formation of large eddies (200-300 km across) which continue moving southwards, spinning anti-clockwise (or clockwise) at rates of up to 5 knots. Eddies can last longer than a year. This behaviour is nicely illustrated in the schematic below, taken from the Conversation article "Can you surf the East Australian Current, Finding Nemo-style?". 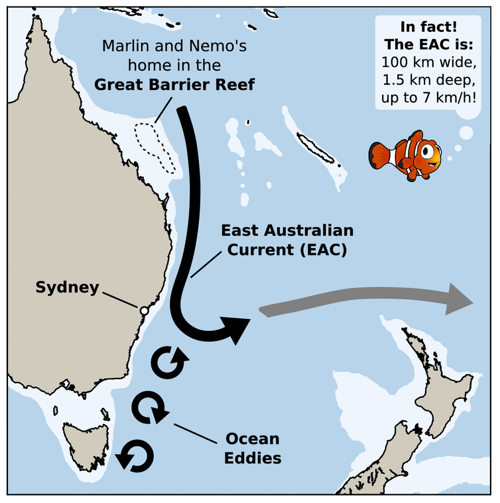 In racing terms, the existence of eddies can make or break your winning chance. If an eddy exists, and you know about it, you can sail with the southward eddy flow; if you don't know about it, you may choose a route which misses this 'travelling highway' or worse, you may end up in the counter northward flow.

We know the EAC differs from year to year. The figures below, taken from the IMOS Ocean Current website show the EAC and sea surface temperature on the 27 December for the last 5 years (2014-2018). 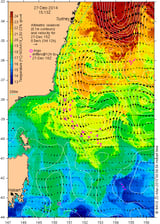 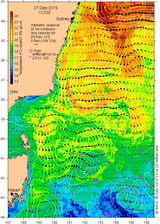 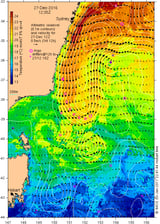 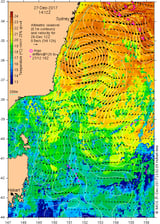 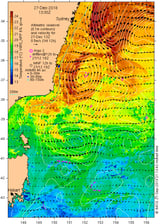 These clearly show differences from year to year, both in the existence and size of eddies, and the strength of the current, and also in the southward extent of the current.

So a good knowledge of the ocean current can make the difference between winning, or not.

Later on this month we will publish an article for navigators which explores in depth the EAC as it affects the Sydney to Hobart race, including examining the available data sources and grib files, how to select an ocean model, the role of sea surface temperature and weighing the risks of chasing strong southerly currents offshore vs staying with the pack on the rhumbline.

Tidetech is providing this CSIRO model for competitors in the Sydney to Hobart and Melbourne and Launceston to Hobart Races as part of a package of Grib files and analyses.