Tricky approaches - it all hangs on Hobart

The last 10 miles of the Rolex Sydney to Hobart Yacht Race (from Iron Pot to the finish) has often been the graveyard of ambitions for many competitors. With the finish line in sight, fickle winds and tides make it a tactician’s nightmare, potentially wrecking an otherwise well-sailed race.

Sydney to Hobart races have traditionally been won and lost in the last 30 miles. There are several elements that can change the conditions quite dramatically, none of them obvious – wind can die after sunset; an often strong outflow from the Derwent River can have a huge effect (particularly after rain) by mixing with the tidal flow to make current patterns complex and unpredictable; river flow often stays in a narrow band all the way out to the Tasman Peninsular, enhanced by the ebb tide.

The tidal regime around Tasmania can be complex and is strongly affected by any recent wind offshore – westerlies will wrap around the bottom of Tasmania creating wind-driven surface currents that interact with tidal flow. Similarly, a northerly flow will accelerate the south-going current down the east side of the Tasman Peninsular.

Tasman Island also often sees quite strong localised tides – if they are with you, it will pay to be close-in when rounding Tasman Island, if against, then a wide berth will avoid the worst of the adverse tide. 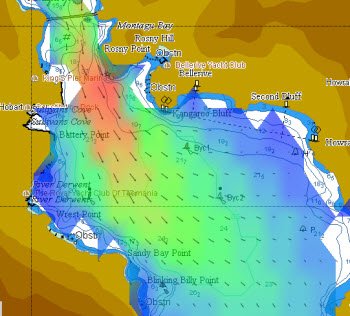 Tidetech has been granted access to the CSIRO (Commonwealth Scientific and Industrial Research Organisation) marine division’s state-of-the-art, high-resolution model that forecasts many parameters – current, temperature, salinity, nutrients and more – for this area.

CSIRO has been researching oceanographic phenomena in this area for years through the $150m Integrated Marine Observing System (IMOS).

With this data, skippers and tacticians will have an opportunity to make the most of arguably one of the flukiest stretches of water in ocean yacht racing.