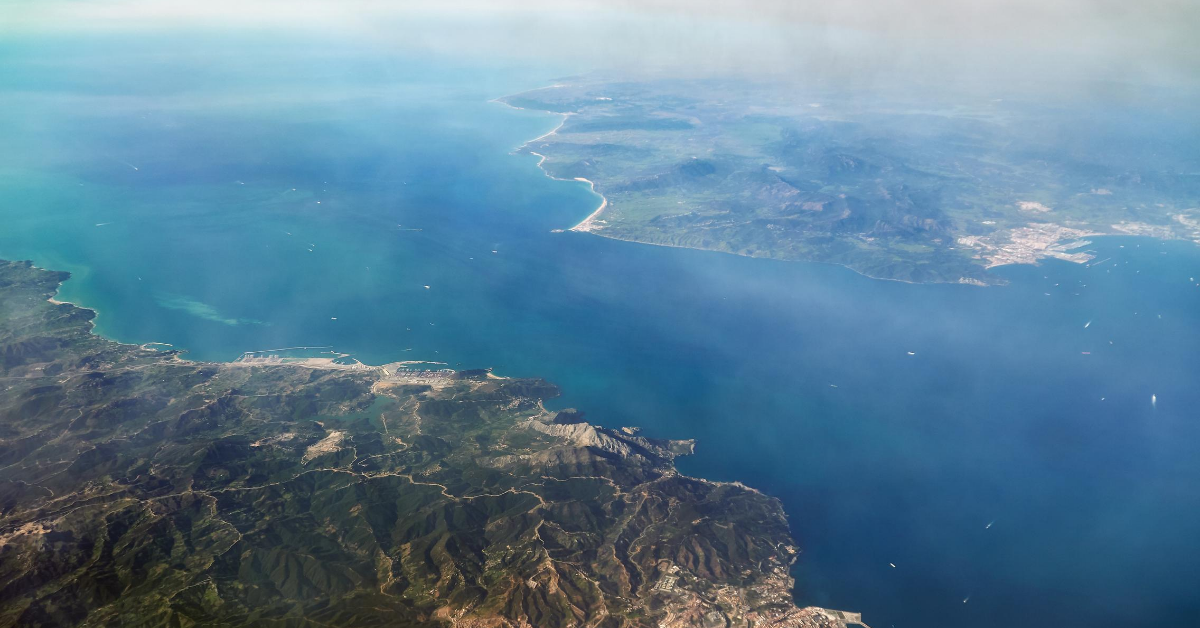 From the rapid evaporation of water that exceeds the influx of water from rivers and rain to the layers of seawater, each of a different density and salinity, there are several ever-changing elements to be aware of when transiting the Strait of Gibraltar.
Here's an outline of just how and why these infamous straits are so complex to navigate.

The Density of Seawater in the Gibraltar Strait

One of the singular features of the Strait of Gibraltar is the Mediterranean inflow and outflow, which consists of layers of water that have different salinity (levels of salt).
The water in the Atlantic is less salty and less dense than water in the Mediterranean, and it flows eastwards into the Mediterranean through the Straits as a surface layer, about 125m deep with a speed of two to three knots.
In contrast, there is a westward outflow of heavier, colder, and more salty water, which works its way out into the Atlantic. The tidal flow will either speed up or slow down the eastern flowing current, depending on the phase of the tide. 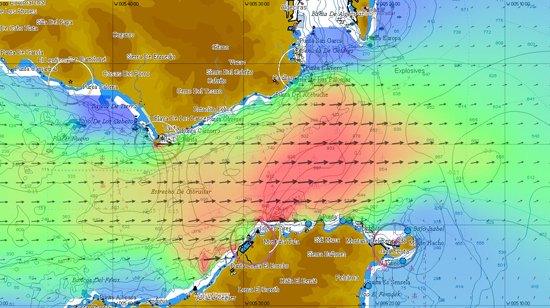 A very distinctive feature of the Strait of Gibraltar is it's continually evaporating body of water. The Mediterranean Sea loses nearly a meter of vertical water height every year.
Around 7 million years ago, the general shape of the Mediterranean basis was nearly the same as today. Due to the movement of tectonic plates, the inflow of water from the ocean to the sea was cut off, leaving the area to evaporate completely. However, around 5.3 million years ago, the tectonic plates moved again, opening the Strait and allowing an immense amount of water to flow from the ocean, filling the Mediterranean basin once again.
This evaporation is still occurring today, and it's estimated that were the Strait closed today at our current higher sea level, the basin would evaporate once again.

To add another challenging piece to the tidal puzzle that makes up the Strait of Gibraltar, close to the African continent, there is often a narrow counter current of two knots that interacts with the Camarinal Still (the shallowest part of the Strait) and causes internal waves. As noted by NASA;

"The waves are generated as a diurnal tidal pulse flows over the shallow Camarinal Sill at Gibraltar. The waves flow eastward, refract around coastal features; can be traced for as much as 150 km, and sometimes create interference patterns with refracted waves." - Earth Observatory, NASA

These internal waves are a vertical motion between the two layers and can have a displacement sometimes exceeding 100m with a wavelength of two to four km. They're so distinct as a surface wave pattern that sunlight is deferentially scattered off the water surface and the waves can be observed by astronauts in space!

You can see exactly how this looks in the video below.

As the upper-level flow pours into the Mediterranean, the Coriolis force (an effect of the earth's rotation) causes it to form a large clockwise eddy (gyre) off the North African coast called the Alboran Gyre. A smaller weak anti-clockwise eddy forms to the North. Countercurrents (westward flows) can be seen close inshore along both shores, particularly near headlands that project into the current. A layer of outward-flowing dense water stays deep after exiting the Mediterranean and forms a ribbon extending along the Spanish and Portuguese coasts at about 1000m depth. It splits into two at Cape St Vincent, with one branch going west and the other branch going North. Evidence of this flow is seen as far north as the Greenland-Scotland sill.

Amazingly, the westward flowing Mediterranean water reaches the American continent and travels south to Antarctica and the Weddell Sea.

Modelling the Strait of Gibraltar

Over 100,000 ships transit through Gibraltar every year for commercial purposes, so modelling of the complexity of the Strait is key for safe passage.

You can browse our ocean data modelling covering Biscay, the Iberian Peninsula and the Gibraltar Strait here.