“I need to get to the East Australian Current. EAC?”

If you’ve seen the Disney/Pixar animated film Finding Nemo, you’ll know that this conversation happens between a fish and a turtle in the East Australian Current.

In Finding Nemo, the ‘EAC’ is considered a bit of a superhighway for fish and turtles to head south down the coast of Australia. Pretty accurate, it turns out…

What is the EAC?

The East Australian Current is a large-scale flow of water that runs south along the east coast of Australia. It sweeps warm tropical waters from the Coral Sea southwards to interact with the cool temperate waters of the Tasman Sea. It varies in size and can be between 15km-100km wide and 200m-500m deep and can flow at speeds of up to 4kts.

How does the EAC work?

The prevailing winds of the South Pacific Ocean create an anti-clockwise circulation of water with the assistance of the Coriolis effect (the rotation of the Earth).

The EAC is created by the water that flows toward the western edge of the Pacific Ocean. The current then wanders south along the east coast of Australia.

As the current curves along the coast eddies are created - swirling pools of water that rotate clockwise or anti-clockwise from or within the main flow of the current. The core of an eddy can flow in either a clockwise or anticlockwise direction depending on temperature (cool or warm respectively).

There is quite a lot of variation in the current along the coast as a result of coastal and oceanic processes, changes in the continental shelf and seasonal fluctuations.

How it affects the Sydney to Hobart

Unbeknownst to many yachts in the race over the years, the EAC has been strengthening and creeping steadily southwards over the last 60 years. The south Tasman Sea region has become both warmer and saltier which has resulted in a southward advance of the EAC Extension (the most southerly aspect of the current) of about 350km. There are a variety of scientific and climate-based reasons for this but overall this means the current will continue to affect the Sydney-Hobart in greater measure over the next several decades.

Once the yachts reach the bottom edge of Australia they move from the EAC, which starts to sweep east, to join a current that becomes the Tasman Outflow and curves around to the west below Tasmania. 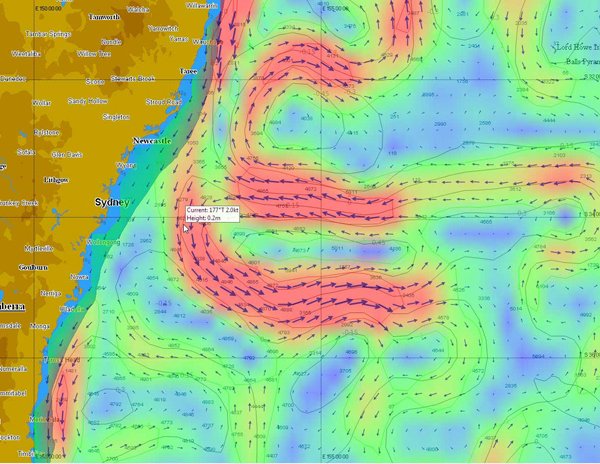